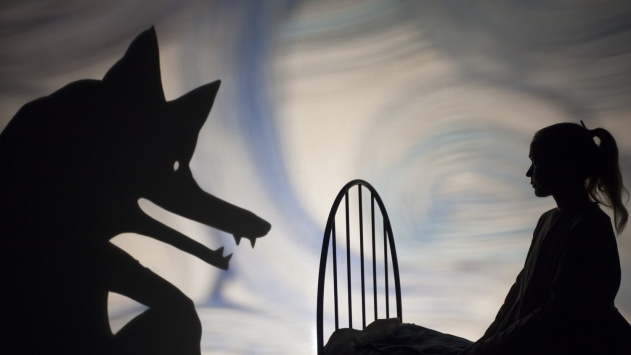 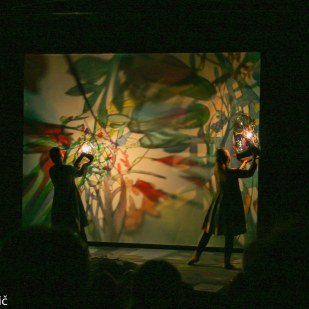 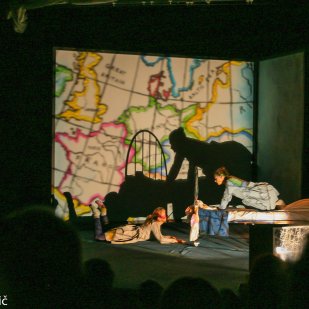 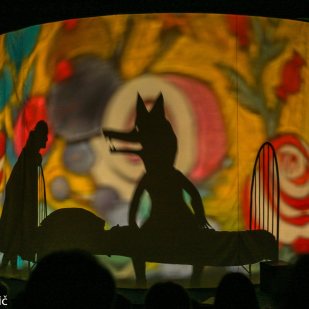 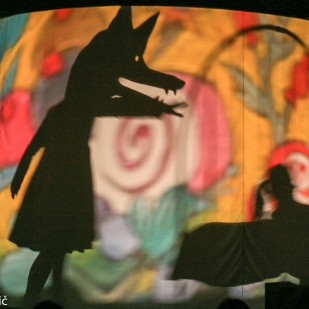 Translator:Veronika Simoniti
Art Design (following Isabelle Arsenault motifs):Federica Ferrari
Music:Mitja Vrhovnik Smrekar
Author of Songs:Anja Golob
Language Coach:Irena Androjna Mencinger
Assistant Dramaturgy:Katja Gorečan (AGRFT)
Cast:Martina Maurič Lazar and Maja Kunšič
Stage Manager and Sound Designer:Luka Bernetič
Producer:Ana Rokvić Pinterič
Lights:Maša Avsec
Set Technician:Iztok Vrhovnik
Shadow Puppets, Set and Costume Production:Iztok Bobić, Federica Ferrari, Zala Kalan, Agnese Meroni,
Sandra Birjukov, Marjetka Valjavec, Vladson, Uroš Mehle s. p.
***
The staging of Virginija Volk (Virginia Wolf) will be based on the motifs from the picture book by Kyo Maclean and Isabelle Arsenault. Vanessa has a sister Virginia, who feels wolfish and behaves that way too. She constantly howls, snarls and yelps, she is moody, she doesn’t feel like hanging out with anybody, everything annoys her and nothing in this world can comfort her. But Vanessa decides to put her in a good mood. She tries just about everything, but it’s not that easy. Finally, Virginia tells her that she would be happy if she could fly away. Somewhere, where there are muffins, beautiful flowers and trees, and where there is absolutely no grief. To the Flower Park! Without hesitation, Vanessa looks up for a box of crayons and the walls in the room soon become colourful and picturesque Virginia’s room turns into a Flower Valley – a blooming garden, full of colours and freshness. Suddenly, everything begins to fly, and becomes bright and cheerful, including Virginia herself.
The inspiration for both the title and story of this picture book was triggered by English writer Virginia Woolf, who suffered from depression and melancholy and her sister Vanessa Bell who was a painter. It is not about their biography, but rather about a certain outline that has accompanied the writer almost all her life. The story reminds us of the strength and positive effects of imagination that helps us to recover and get back to our feet. It also draws a subtle picture of sisterly love and friendship in general. Its task – among other things -, is to notice the others, try to understand them and help them.
Both Virginia’s gloomy storm and Vanessa’s explosion of colours will be presented on stage with the imaginary power of shadow theatre. The world of shadows and colours will feature with grace, feeling, easiness and compassion an imaginary adventure between nightmares and dreams that will finally fuse into a hymn to life.Italian director Fabrizio Montecchi is one of the greatest masters of Shadow Theatre, which he is constantly discovering and developing with the worldwide known performances of the Teatro Gioco Vita. He has already directed in the Lutkovno gledališče Ljubljana a successful, award winning and a well received – both among adults and children -, performance Duck, Death and the Tulip.